Its the beginning of our second summer spent living at atangard. ( Third summer if you count the hand full of us who spent the summer of 2009 renovating the old hotel we now call home). Still, there are plenty of little improvements and custom upgrades being worked on all the time by our handy maintenance crew. Apart from the practical things, there are some subtle (yet…loud) changes in and amongst our some 8000 sf of inhabited space.

Check it out! Sophia had the idea to paint a forest in the laundry room (which, i might add, has had a serious face lift in terms of organization and functionality). Cool right? And, it worked out perfectly, because it just so happens that green and brown are the color of choice for feature walls in atangard. (hence the multiple cans of left over paint). 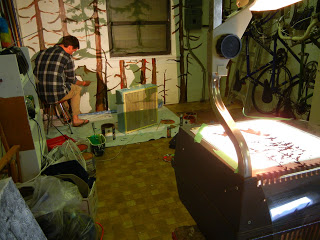 This was all happening last friday night, while another group of patriotic hockey fans were cheering on the canucks in what turned out to be a 1-0 win for us. (GO CANUCKS GO!!!!!) My camera battery died 20 seconds before the game ended, but I did manage to catch a debatably epic moment.

While were on the subject of improvements, I must mention the third official “bike art” piece composed by our very own Jenny Born. I believe this particular piece articulates very well the jenster adventures some of us have had the privilege of hearing a about/be a part of. (aka. bike tours across vietnam/ local green party bike ride/triathlon/bike to work week..ect.) Jenny B, you never cease to amaze me!